What is it about the land of Israel that makes it act as Judaism’s muse?  Surely all landscapes have the power to call to human beings.

For example, “America the Beautiful” croons of the landscape’s grandeur. The writer, Katharine Bates, wrote of these sights after a breathtaking cross-country train ride from Massachusetts to Colorado. The ride gave her the words:  amber waves of grain, purple mountains majesty, the fruited plain!  All song worthy; all symbolic of the promise that the American frontier held.

But why? To understand, we turn to Rahel, a great pioneer poet of Israel. Rahel Bluwstein is so loved and respected, she is known by just her first name in Israel.  In 1909, at the age of 19, Rahel arrived in Eretz Yisrael with her sister.  Inspired by the spirit of the early Zionist pioneers, she stayed for years, working the land on various kibbutzim. Life for the early pioneers was excruciatingly difficult. Malaria ran rampant and food could be scarce.  But Rahel and her comrades fell in love with the earth their worked in northern Israel, specifically the area by the Sea of Galilee. She wrote:

“I remember a moonlit night in summer, we rowed out boats toward the sands of “that shore.” We strode on the earth, preserving the footsteps of Abraham; we heard the echo of God’s words in the olden days: “I will make your name great.” We climbed boulders and looked down on the narrow fissures. There the springs quenched the ancient carob roots with chill waters…

I remember we planted eucalyptus trees in a swamp, where the Jordan River leaves the Kinneret and runs southwards to the Negev, foaming on the rocks, flooding its banks. More than one of us trembled with fever afterwards on a thin bed. But not one of us, not even for a moment, ever lost the feeling of thankfulness for our fate. We labored out of soulfulness.

The thirst was racking. One of us would enter the water with our favored container- a tin can once used for kerosene. What a pleasure it was to reach down toward the gravel of the shore, and to drink endlessly, like a forest creature, to immerse one’s burning face into the water, stop to take a breath of air, and once again to drink until exhaustion.

It is said: this water has wondrous properties. Whoever has drunk it will return. Is this why the young men abroad long for the quiet shores of the Kinneret, because their ancestors quenched thirst here.

On the Sabbath I used to set out for a rest in the nearby hills. So many twisting crevices, so many dear hiding places, so many green river beds: if only I could remain here all my life. It is good to walk down the path around the shore, until one sees the wall of the city and its round towers. Tiberius is ancient. It doesn’t look like a city to me, but rather a drawing in a school book about the distant past. Look, these stones saw the pale face of the preacher of Nazareth. Heard the oral law of the rabbinical sages…

The Kinneret is not simply a landscape, not just a part of nature; the fate of a people is contained in its name. Our past peeks out of it to watch us with thousands of eyes; with thousands of mouths it communicates with our hearts.”

Surely, there are thousands of beautiful shorelines across the globe. But Rahel picks up on a uniqueness to Israel’s shores. It has everything to do with our historical footprint there.

Despite dispersions, Jews, in some number, have continuously lived in the land. Walking in the footsteps of Abraham, our ancestors have all thirsted for freedom, connectedness and dignity. Every generation, at one point or another, has sought these in Israel.  On a whole, the land of Israel has quenched this thirst. Israel has always been the place where Jews could be Jews. It is where the plants and animals match those described in our most ancient texts.  Israel brings our tradition to life – like a storybook coming true.

It has not always been pristine. The land has produced our people’s greatest joys as well as our greatest sorrows.  But put together over the years, the land has shaped our people’s story. When it comes to Jewish history and tradition through he years, we can look at it this way: we wrote it down in Torah; we sang it in our prayers; we lived it in Eretz Yisrael.

As Rahel masterfully said, “The Kinneret is not simply a landscape, not just a part of nature; the fate of a people is contained in its name. Our past peeks out of it to watch us with thousands of eyes; with thousands of mouths it communicates with our hearts.”

Perhaps that is the intangible feeling we get when we travel there.  It’s the buzz of that ancient communication.

I felt it the year I lived there.  I settled in the new part of Jerusalem at 7 Molcho Street.  My life was much easier than Rahel’s. The supermarket Supersol was open down the block. No malaria threatened my life.  My biggest problem was a flooded living room after a hot water heater exploded. It was city life and I had to travel out to find the vegetation, which, in the small world we live in now, has groomed paths and hiking trails.

In totally different worlds…yet I still feel Rahel’s experience was mine. I too saw my ancestors in each rusty crevice. I heard their whispers through the silence that descended on Shabbat.  Trees, mountains and lakes, while found everywhere, seemed lined with ancient living. 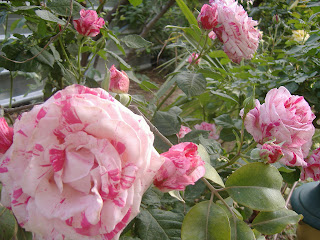 And they drove me to write.  These flowers appeared one day on the walk to my house and caused this inspiration:

Pesach cleaning swept the dampness from the corners of the kitchen
Brushed it out the front door where it dissolved in the sun
The water bubbles bursting with excitement
As they rose into the blue skies.

I hadn’t known it when I moved in,
But there was a thick rose patch that lined the walk to my front door
I didn’t notice stems or buds, just, one day, roses!

Fanned out, sunsplashing,
the quiet gasp of resuscitation.
A triumphant return from the depths.
A surprising restoration of color to the soul. 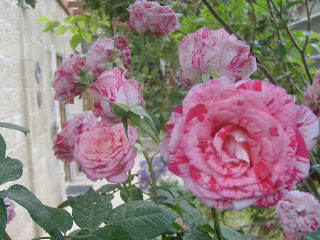 I don’t know that anything was too different about these roses – although if you can tell me how they got this swirly pattern, that would be amazing.  All I know is that they spoke to me.  Would pretty roses speak to me anywhere? Yes. But for some reason, moments seem to amplify in the Land of Israel. The land speaks. It doesn’t have a monopoly on communication, but it sure does have a continuous history of it.

And the important part: as Jews, we’ve learned to speak back.  The land is not perfect – physically, politically – but just like Rahel and the early pioneers worked it with love, so too the Jews before them and the Jews after them plowed it.  They have plowed it for resources and for meaning. May we, here, continue to plow it in our own day – whether through planting trees or planting hospitals or simply growing relationships to our Jewish family over there. And whatever we do, may we continue to plow it for peace.
Posted by WCT Living Torah at 10:25 AM