We associate Hanukkah so much with miracles. Yet the word Hanukkah really means dedication.

Of course, the name conjures the re-dedication of the temple in Jerusalem. The miracle of the Hanukkah story is not so much the oil lasting 8 days but the miracle of how we overcame great adversity to live to see Judaism enrich the lives of another generation. The fact that we could dedication our temple and then our children to a brighter future, that’s the miracle.

Recently went with our 10th-12th graders to Washington DC on our L’taken Seminar. The teens spend the weekend learning about major issues in our country and then they learn about the democratic advocacy process - specifically lobbying their representatives.

The trip also includes time out and about in Georgetown and Pentagon Row, for fun. We also made the decision to go to the African American History and Culture Museum, as well as the Holocaust Museum.

I’ve now been to the Holocaust Museum at least 5 times. I always underestimate the ways it will hit me. I figure I’ve got the place memorized, but I always seem to forget that seeing it through the teens’ eyes helps me to see it freshly. 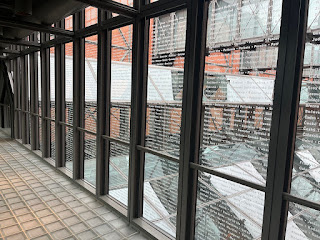 This year, I stationed myself near a particular glass hallway. Etched on the walls are the names of communities that were decimated in the Holocaust.

As our teens walked by, I brought them over one to one name in particular. Rakovnik. “Do you recognize that name?” I asked them? “Yes….isn’t that where our Torah is from?” they all responded.

Indeed it is. At Woodlands, we house the Torah scroll that used to serve the people of Rakovnik. 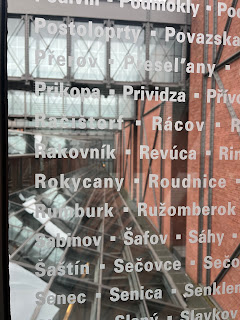 When we debriefed the experience, one of our teens mentioned this moment of connection, remarking that it just made the whole thing very real, very tangible. This wasn’t some hypothetical town, listed among hundreds of others. This was a town with a Torah, a Torah that would have no home if we at Woodlands had not taken it in and with it, the memory of the lives that are no more.

Hanukkah seeks to do the same sort of thing - to reach back into Jewish history, in this case, ancient history - and make it very real. When we light our menorahs, we bring the memory of our ancestors into our homes. We identify with these people we never met, but who’s souls and story we seem to know intimately.

Every night we light our menorahs, we are rededicating the temple anew. Every night, as we pick up the shamash candle and use it to light the others, we dedicate ourselves to fighting back against the forces that would have us and our traditions erased.

Holding the shamash makes each of us a torch bearer, carrying the miraculous light of the Maccabees into today. Every night, as we light our menorahs, we dedicate ourselves to the Jewish future, to surviving even in the face of considerable danger. 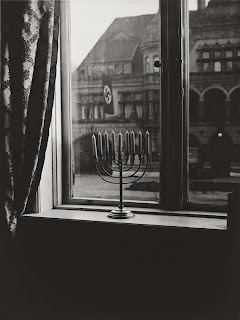 You’ve probably seen this photo before. It’s from 1931, amid the Nazi's rise to power. It was taken in the northern port city of Kiel, Germany, opposite the regional Nazi headquarters.

Rachel Posner, married to Rabbi Akvia Posner, photographed their menorah in the window. In the now-historic photograph, the family's menorah is seen on the windowsill in the foreground, and outside the window is a large swastika flag hanging on the building's facade.

On the back of the photograph, Rachel wrote: “The flag says ‘death to Judaism,’ the light says ‘Judaism will live forever.'”

This Hanukkah Rachel and Akiva’s grandchildren returned to Germany from their home in Israel. 91 years after the photograph was taken, the Posner grandchildren lit the very same menorah in Berlin’s Bellevue Palace with the assistance of Germany’s president, President Steinmeier. Miraculously, Jewish life is thriving in Germany. Just like it is in the US.

And yet, also like America, Germany saw a double digit increase in anti-semitic acts this year, mostly due to a growing far-right movement, similar to what we are seeing in the US.

Indeed, it is time to be the shammashim - the caretakers, the torchbearers.

It is time to be brave like a Maccabee…to make their story ours. Be assured, it is not some mythical fable, relegated to children’s books and holiday tchotchkes. We must call upon their resolve to not let supremacists and bigots gain the upper hand.

Because YOU, the person lighting the menorah, are the Hanukkah miracle. The sheer fact that we Jews still exist and that every year in the month of Kislev, we eat doughnuts and play dreidel and light our chanukiyot, is a miracle. In Judaism, we never let a miracle go unnoticed or unappreciated.  And above all, we always pay the miracle forward.

Al hanissim v’al hapurkan…Thank you God for these miracles I’m looking at on screen…for all the redemptions, for the mighty deeds and saving acts throughout the generations, just as our ancestors clung to your light in days of old, we cherish it now.