I will tell my grandchildren that when Donald Trump was elected, people protested the outcome. 500,000 people marched in the Women’s March in Washington DC. Up to 5 Million people worldwide joined them in solidarity.

I’ll recall that the size was one thing, but the tenor was another. As we marched, we were astounded by the lack of violence. No arrests. Not a shot fired. 5 million people worldwide marched in peaceful conviction. Signs raised high, singing songs of resistance.

I will also have to tell my grandchildren that when Joe Biden was elected, people protested the outcome. But then I will need to explain to them how a mob of violent extremists stormed the Capitol, infiltrating the sacred halls of Congress. Unmasked, shouting, shoving and shaking our democracy to its core. Shots fired. Five people died. A Confederate flag strode through the halls along with a man in a “Camp Auschwitz” sweatshirt.

I don’t know what I’ll tell my grandchildren next. It could be that I name this day as the day we all realized how fractured and vulnerable our nation is to extremism. That America’s dignity was permanently diminished by the ego of a man who delights in grabbing power by the groin and forcing himself upon others.

I truly hope this is not the case.

I hope I will tell my grandchildren that this was the day when democracy prevailed, the moment we crossed the aisle to declare that some values are still sacred: our union is sacred, our constitution is sacred – document evolving but rooted in Godly truths. I hope I can say that this was the day we remembered that America believes in justice, domestic tranquility, and the welfare of all.

I know that the mob and the treasonous movement behind it feels forgotten in this promise. They feel wronged and overlooked by their country. That’s the perverted thinking of white nationalism.

And yet…they need to know: you must earn the privileges America affords. You earn these privileges when you respect the democratic process. You earn it when you say no to demagoguery, when you contribute to the greater good through peaceful protest and respectfully lobbying for your cause. There is much about our country that needs to be fixed and the American way is to roll up our sleeves and get to fixing them.

This week’s Torah portion is Shemot and it has much to say about this moment in history. Shemot transports us back to when a Pharaoh lorded over Egypt. A new Pharaoh “who knew not Joseph” and all that he had done for Egypt in its time of trouble. A Pharaoh who knew only power and not the public good. This Pharaoh, unlike others we see in Torah, is insecure. He fears that his power will weaken by the growth and prosperity of the Israelites. So he mounts a campaign to assert his power. He enslaves the Israelites and instills hatred for them within the Egyptian people. He tries to assert his infallibility by displaying the most fallible of traits: fear, spreading misinformation, and over-blown ego.

He not only hurts the Hebrews, but he wreaks havoc on his own people as he lets the 10 plagues rain down upon them rather than admit he is wrong and do the right thing by liberating God’s people.

We spend the beginning of Shemot waiting for Moses, the man who will stare down the bully and magically right all the wrongs. But our parsha teaches us that when the world has descended so deep into madness, liberation doesn’t happen overnight. Indeed, Moses only comes along because of the quiet power of two midwives: Shifra and Puah. These two women, in their wisdom and strength, set the dawn into motion.

Pharaoh issues them orders: when you assist the Israelite women with birth, look at the baby. If it is a girl, it lives, if it is a boy, kill it. But then we’re told: “The midwives, fearing God, did not do as the king of Egypt had told them; they let the boys live.” When Pharaoh summons them to ask why they didn’t follow orders, they tell him that the Hebrew women are so vigorous, that the babies are delivered before they can even arrive to do his evil bidding.

Shifra and Puah’s righteous act of disobedience does not stop Pharaoh. In fact, he doubles down – he orders that any Egyptian who sees an Israelite baby boy should to throw him in the Nile.

But it’s this intensification, this despicable step past the imaginable, that eventually sets into motion Moses’ birthstory and the eventual redemption of the Israelites.

The message is clear: There will be leaders and their cronies who will do vile things. And even when we condemn or briefly thwart their decrees, they may continue their business, evening doubling down in their schemes.

But Shifra and Puah call to us from the past. These brave women, who hurried to the bedsides of the Israelite women, dashing from shadow to shadow so as not to be seen…calmly whispering words of encouragement, carefully birthing the next generation with confident, caring hands. They cradled a brighter day in their arms. They sang them a birthsong of resistance.

Torah says God dealt well with the midwives and rewarded them by establishing houses – distinguished lineages – in their names.

Where are those households today? Well, I saw the daughters and sons of Shifra on the senate floor. They are the senate aides, the brave, quick thinkers who carried the Electoral 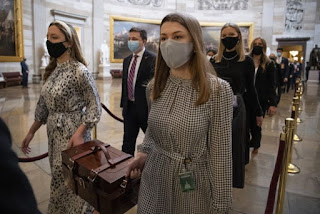 College ballots from the senate-under-siege. Walking two by two, holding the brown, centuries-old ballot boxes, they carried many legacies in their hands. Writer Olivia Harvey helps us to understand the stand they took with their quiet, courageous action:

Among the photos of "patriots," as the violent rioters were calling themselves, lounging at House Speaker Nancy Pelosi's desk, seating themselves at the vice president's post on the Senate floor, breaking windows and doors, and climbing the statues in Statuary Hall, there were also photos of the Senate aides who transported the crucial electoral ballot boxes out of the Capitol building before rioters had a chance to get their hands on the votes…The aides made sure they continued to do their job amid the security breach, thus saving America's democratic process.

It's one thing to call yourself a patriot. It’s another to act like one. 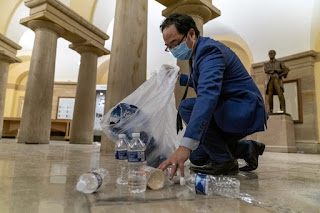 I saw the household of Puah in the picture of NJ Representative Andy Kim, who was returning to the house floor when he asked for a trash bag and helped pick up the discarded water bottles, clothing and Trump flags with his bare hands.

And finally, I see the households of the midwives in the faces of the Woodlands teens, who every two years go to Washington DC to participate in the Religious Action Center’s L’Taken Seminar. They learn about the beauty of the democratic process. They spend the night preparing speeches, getting their words and facts right. They dress in suit jackets, skirts and pressed slacks. They walk calmly up the steps of the Capitol, enter its halls reverently and lobby their representatives for causes that deserve justice. They say please and thank you and they change the world.
These are the acts of patriots. Tonight, I pray for the harmony in our union, I pray that our democracy will withstand and recover from this attack on its integrity. May I one day tell my grandchildren that on January 6, 2021, in the midst of a pandemic, we saw America descend into darkness, but that the light of democracy shone through the seditious chasm tenfold. 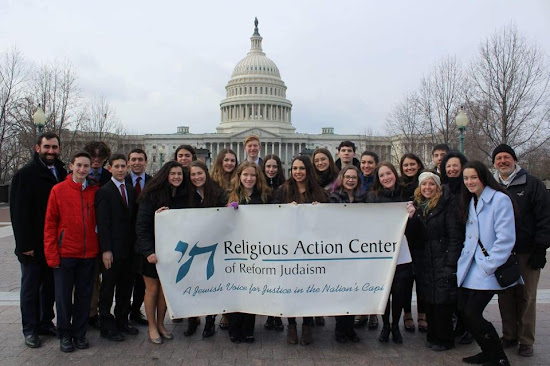