My Grandma Faith was a woman who spoke in proclamations. She’s famous for them really. For example:

Every Thanksgiving she would proclaim that “this is the last Thanksgiving” she’d be making her famous stuffed cabbage. But sure enough, with enough cajoling from my sister, she’d be rolling those cabbage leaves up again the following year.

Or, if you ever brought up that time that so-and-so was sick or ended up in the hospital, from a broken bone to a difficult labor, she would always proclaim, “…and we almost lost her!” According to the grandmother, every member of our family was “almost lost” at some point in their lives.

Oh, and then the most random one was when she would proclaim she didn’t like Spanish food because in a prior life she was a witch burned at the stake in the Spanish Inquisition.

Given all this, I guess it makes sense that she sang Dayenu with fervor at Passover. Dayenu is the ultimate proclamation – it would have been enough! – a requires an enthusiastic singing voice, which my grandmother had.

When my Grandma Faith would call me, she’d say, “Mara, it’s your lady grandmother here!” Grandma Faith was your classic lady of the 1940’s, a true member of the greatest generation. She was an FDR-loving, liberally minded gal who worked her whole life, even though she really didn’t have to. She was a teacher and guidance counselor. She played bridge and drank scotch with her husband, my grandfather, who she was happily married to for 70 plus years. She was president of her local American Association of University Women. She founded a synagogue and was part of the League of Women Voters. I got my feminism from her.

Rabbi Billy was gracious enough to officiate at her funeral. I had officiated at Mark’s mother’s funeral, and my Grandma Jane’s funeral, but I found this one difficult to do. I didn’t realize why until after the intake. After the intake with my family, Rabbi Billy turned to me and said, “Wow. It’s like they were describing you.” 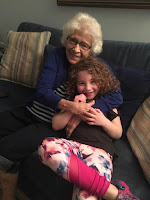 My grandmother referred to Noah as “her royal highness” and Asher as “the holy terror.” In true Grandma fashion, she’d insist on holding them, even though we thought she wasn’t strong enough to do so. “Ridiculous!” she’d say, “do you know how many babies I’ve held in my life?”

Grandma’s bond to Noah in particular was so unique and special. I really miss watching it in action. I’ll never forget when Mark and I took the kids to see my grandparents in Florida. 5 year old Noah hadn’t seen “Gee” in months. The minute we entered their apartment, Noah climbed up onto the couch, gave Grandma a hug, and then put her head in her lap. She remained snuggled up to Grandma until we had to pry her away to go back to the hotel. I think they had twin souls, born in different times. There was always an ease between them, a true closeness. We have so many pictures of the two of them snuggling. I am so grateful for those pictures.

My grandma was diagnosed with Leukemia and died in the span of 3 months. I was able to be with her in Florida while she was in hospice. She was alert for the first day, less so for the ones after. It may sound strange to say, but those days in hospice were some of the most special in my life…particularly those hours when I sent my mom and my aunt away for some coffee. I bought some trashy magazines, turned off the lights, and just sat next to her, holding her hand.

At times she’d get agitated and push back the covers. She’d say in a stupor, “Mara, this is ridiculous! Let me get my shoes!” and I’d have to tuck her back into bed. “Ssssh, grandma, ssssh.” The hospice nurse said this was normal. When someone is dying, but lived life so determinedly, it is hard for them to let go. “They fight it,” she told me.

At one point, Grandma apologized. She said, “I’m so sorry you have to sit here with me like this.” I proclaimed to her: “Grandma, I’ve got two kids who never leave me alone and a full time job. Sitting here with you, reading my trashy magazines, is a gift!” She smiled and shifted back to sleep.

Amazingly, I wasn’t sad in those moments. I felt calm, complete and at peace. If one must die, this should be the way it happens. A room full of natural light, affirmations of love, and stories of a life well lived.

Whereas once my grandmother held my mother, held me, held my children, now I could hold her. And when I couldn’t anymore, God could.
Posted by WCT Living Torah at 10:42 AM