There’s a question that has haunted me since my youth. A deep one, perhaps unanswerable, perhaps the greatest existential mystery of our time: when it comes to the 10 plagues of Egypt…what was so bad about the plague of frogs?

It would seem that the rabbis had the same question about this week’s Torah portion, Va’era. In diving into the issue, many of the rabbis conclude that the word is really not frogs but crocodiles. Now, crocodiles make a lot more sense. If we’re talking about plagues that afflicted the Egyptians, natural disasters that threatened their lives, crocodiles certainly fit the bill.

There’s also the explanation that when the frogs died, they lay everywhere – rotting, stinking, incubating maggots and helping start the next plague: lice. That makes sense too.
Furthermore, a quick dive into midrash offers another explanation for why the frogs weren’t so cute to sing about. The language of the Hebrew passage is peculiar: the word for frogs is actually in the singular. God (through Moses) says to Pharaoh: “If you refuse to let the Israelites go, behold, I will smite all your territory with a frog.” 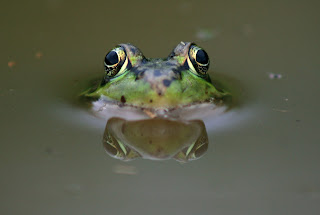 So how did one frog become a plague? The rabbis explain that indeed one frog did come up from the Nile first – and when the Egyptians tried to smash it (in order to kill it), it just spewed out more frogs. In their blind anger, the Egyptians kept smashing the frogs, which led to more frogs, inciting a crazy game of whack-a-frog that ended in Egypt being overwhelmed by amphibians.

The issue wasn’t the frogs, the rabbis teach, as much as it was the Egyptians’ rashness, their inability to take a deep breath, evaluate the situation and plan calmly. This was in fact their problem all along beginning with going along with Pharaoh’s plan to enslave the Israelites before they could rise up.

Moses was guilty of this impulse as well. He rashly struck down the Egyptian taskmaster and killed him. In fact, it is Moses’ rashness later in the story – striking the rock to get water, instead of speaking to it – that prevents him from entering the Promised Land.
Fear and anxiety are able motivators. They can drive us to impetuous action. And if there is one thing our society fears most these days, it would be empty space. It takes a great deal of inner strength to sit alone for any amount of time before picking up a smart device to swipe and scroll the emptiness away.

I for one always have music on in the background. And, let me confide something in each of you – a horrible confession – I have a really, really hard time during the silent prayer. It is nearly impossible for me to turn off my brain for the 60 seconds where we sit in quiet. I’ve tried deep breathing. I’ve tried just delighting in the quiet moment. I’ve tried saying a prayer. None of it works. Outside of that time, if you’ve noticed, I’ve almost never asked you to close your eyes and meditate because for the love of God, I just can’t do it.

Yet there was an experience on our recent trip to Israel that disrupted the complacency I had in regards to this fact. We visited many places in Israel. There was little time for quiet – there were sites to see, people to chat with on the bus, giant breakfasts to eat. Yet, our itinerary took a great route. From the bustling metropolis of Tel Aviv, we drove south into the Negev Desert. As much as we have “made the desert bloom,” most of it is still untouched rock formations, hidden wadis, and wind-hollowed caves.

One morning, we hiked near Avdat – a breathtaking hike past an ancient pistachio tree, a rushing waterfall, and up a canyon. The serene beauty of the environs seeped into our skin. I feel so alive, so connected to my ancestors in the Negev.

In the afternoon, we visited the Ramon crater – a geological wonder in the belly of Israel that was formed over 220 million years ago when oceans covered the area. We made two stops. The second was just off the road alongside a small wadi. It’s the rainy season, so there’s water in a small pool, surrounded by gravelly rock mounds and small cliffs. 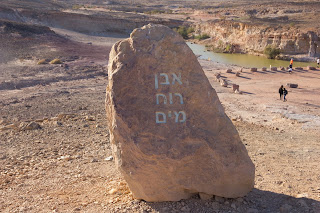 There’s a rock by the entrance to the spot that has three Hebrew words on it: even, ruach, mayim. I turned to members of our group, and with a sarcastic laugh, I explained that it is the most profound rock I’ve ever seen. It says: rock, wind, water. Duh! That’s all that’s there!
The spot was beautiful. The best that nature had to offer. But imagine my horror when I heard the words start to come out of our tour guide’s mouth: now I want everyone to find a spot by themselves. We are going to sit quietly in this space.

Ugh. I’m thinking, I’m the group leader. I really should follow the instructions. Fine. I’ll find a spot, but I won’t meditate. 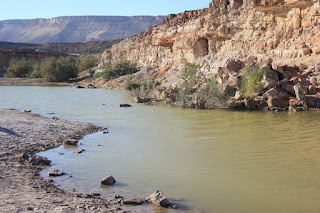 I climbed up to a small peak that jutted out. I had a good view of the group – a wonderful mess of people who by now I had been getting to know even more deeply. I looked at the rocks – beautiful strata of time. I watched the water – rippling with the wintertime’s abundance. I tried to do everything but close my eyes – but then the wind came whipping around the bend. I sat cross legged, I closed my eyes, I breathed. The wind kept flowing, swirling around my head like a concentrated vortex. And even doubtful ol’ me had a profound moment of blissful, sacred emptiness.

Rock, wind, water. It did not need to be more complicated than that. God’s creation exists in ways to remind us that we do not need to fill every moment up with words.

Wind in Hebrew is ruach – the same word for spirit. In the second line of Genesis, we learn that “the earth was formless and empty, darkness lay over the surface of the deep, v’ruach Elohim m’rachefet al p’nei hamayim, and the Spirit of God was hovering over the waters.”

We don’t know how long God’s spirit rustled around the void before it became time to start bending the light, forming the stone and splitting the waters – before all the processes of creation and evolution slowly got underway. Yet we can get snapshots of what it was like – the quiet peace of basic elements unmuddied by words and screens and wars and things.
And if we just let ourselves – allow ourselves the space to sense it, we might be surprised by the ease in which the peace can come rolling in.

vacant and hollow,
strangely heavy…
considering it was empty.

So after millennia of barrenness
and eons of void,
With a desperate heave of distressed energy
one miniscule, puny, sub-atomic particle lightly tapped another
and an explosion cleared out the dark.

And even though millions of years would still pass
before the first conversation between man and Creator would occur,
every epoch felt as a day…

…as the sun sprouted and the moon beamed
the bacteria split and the algae bloomed
roots soaked in water and flowers ballooned
fish grew legs that trudged into mud
and the chimps cackled their call,

And just as the bounty seemed enough to make the void a distant memory,
A baby cried,
And the spirit of God moved briskly into the garden to calm him.

If God has the patience to make the space, even knowing what wonders are to come, then certainly we can aspire to pause, make the room, and allow the future to unfold in its due time. Shabbat Shalom.
Posted by WCT Living Torah at 10:55 AM